It's been a year since a routine, follow-up anatomy scan changed everything. At 22 weeks, I was dilated 2 cm, bulging amniotic sac, and 100% effaced. I was admitted to the hospital, and given a rescue cerclage.

Allow me to indulge in a little looking back at the two days that kicked off our 100 days of hospital. I'm the mom who relegated most of the updates of Isaac's NICU stay to 7 Quick Takes, so I think I'm allowed this one. Smiley face emoji.

//The long walk from maternal fetal medicine to labor & delivery triage. Seriously, why were they letting me walk??? It was at least 48 hours before I was allowed to stand up again.

//Dispatching Mark for the essentials: Chik-fil-A and my phone charger while I got checked in. My battery was dying and we had lots of people we needed to get ahold of. Later, asking if I was allowed to sit up to eat.

//Being scolded by nurses and orderlies as I transferred from the gurney to the bed in the antepartum unit. It hadn't sunk in yet just how dire things were and all I wanted was to get off that hard plank, as quickly as possible.

//The slightly overbearing and way overly chipper student nurse who didn't even give me and Mark a moment alone before I headed off to general anesthesia. She would ask things like, "how do you plan to use your time well, now that you're in the hospital?" I'm sure she meant well...

//The tearful conversation with the on-call neonatologist as she honestly portrayed the risks and decisions we'd have to make if the procedure broke my water and Isaac was born right then. How that conversation ended with me sobbing after each potential complication, "he'll still be our baby."

//The consoling conversation that followed with a dear and fatherly priest. He'd counseled me before in our cross of infertility, and now he counseled us that we wouldn't be in the wrong or bad parents if we wanted to hold our baby, and snuggle him in his last moments. It was ok to want to fill his last moments with the love only a mother and father can give instead of desperate pricks and pokes in an all but futile attempt to save a 22 week old baby.

//My dr. asking for some of the holy water Mark had smuggled into pre-op in an empty soda bottle. Asking her to baptize Isaac if he was born during the procedure.

//The on-call maternal fetal medicine doctor telling us that everything went beautifully. Reassuring us that it we would be on pins and needles until we made it 24 weeks/viability but also promising that "we could hope for much more."

//And all the miracles that followed. 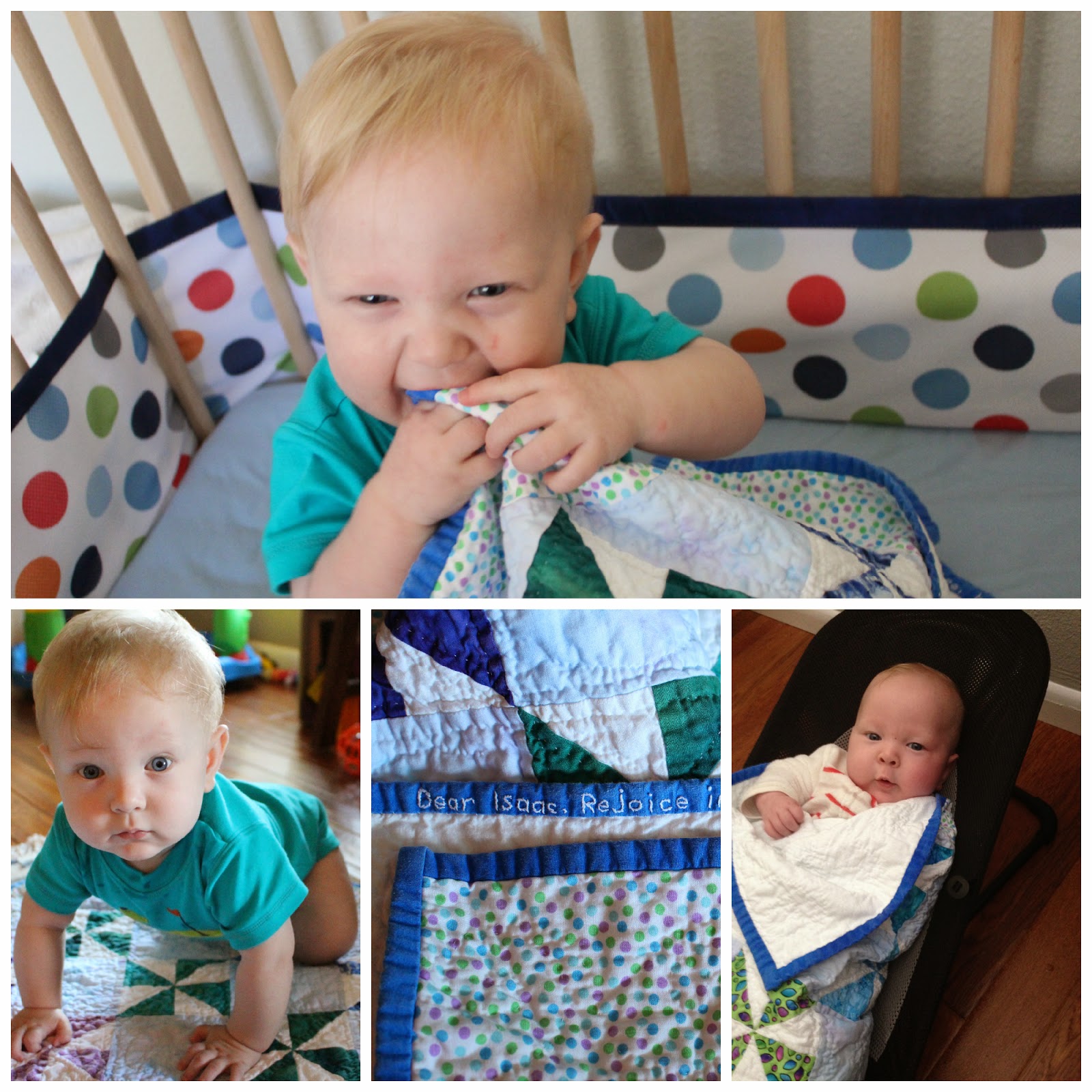 This blanket was made for Isaac by the mother of one of my kindergarteners, the ones I only taught for 20 days. In her note, she told me, "every stitch became a prayer" We used to be able to swaddle Isaac in that blanket, and now he's way too big and wiggly! But every stitch of that quilt reminds me of all the prayers. And so today, we'll go to the grocery store, and have nap time, eat lots of puffs, run some laundry, try a recipe off of pinterest, and in all of that normal, we're saying thanks for all the prayers answered.
Posted by Anne B. at 3:00 PM