A Homecoming and a Birth Story 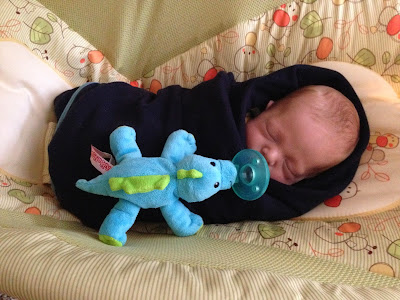 67 days since Isaac's debut, here we are. My time in antepartum brought me back to the blog, and keeping the kind, kind world that prays for him so much updated about Isaac has kept me there, but it just isn't complete without his birth story, which in turn, wasn't complete until he was home, where we've been waiting for him for so long.

Finishing a pregnancy without a third trimester is eerie, even though I haven't known any different. Since it was my first, I was barely showing when I was admitted to the hospital at 22 weeks. I never wore most of the maternity clothes I had just ordered. I never had the discomfort of a baby that was just too big to be in there any more. I never had a baby shower. I never got to nest. And I never felt a contraction.

The week before Isaac was born was the easiest week in the antepartum unit. It had cooled off in Houston, and my doctor had given me once a day wheel chair privileges. In the evening, Mark would come home before it was dark, wheel me to the courtyard in front of our building and I'd read him the Chronicles of Narnia as we watched the sun set in downtown Houston. I'd pause reading to wait for a lull in the roar of the downtown traffic, or to say hello to night nurses just arriving for their shift. More and more, we'd let our conversations drift to what it'd be like when I was doing bed rest at home. It was a really good sign when my doctor who originally told us "we'll talk about 24 weeks when we get to 24 weeks" say that if nothing changed before 32 weeks (November 16) we'd go home for bed rest until the end of the pregnancy. We had put the book on premature babies in a drawer. I stopped googling scary things.

Saturday morning, we were excited to have made it to 27 weeks gestation. Early, early that morning, like 2 am, as I made my daily and frequent pilgrimage of 7 steps to the bathroom, I sneezed. And then it felt like something was poking me. I knew it was the cerclage. I had never seen a cerclage, or felt a cerclage, but I knew that's what it was. Now that I have seen one, a broken one, I can tell you to imagine the ring that holds the plastic cap of a jug of milk, the one that separates when you twist to open it for the first time. Imagine that, smaller, and medical grade of course. Poking you. I crawled back into bed and waited, maybe it was nothing, it didn't hurt now that I wasn't sitting down. The nurse will be in for vitals any minute, no need to push the button. Maybe Mark will stir. If he does, I'll tell him and see if he thinks I should press the button.

The nurse did come for vitals. And scolded me for not pushing the button. She couldn't see anything; the doctor came and checked, the cerclage was a little lower, but still there. Wheelchair privileges were revoked. We canceled plans for a friend to come visit who was in town for one day only. The IV got put back in. We waited and monitored and nothing happened.

The next morning, still early, same pilgrimage, I coughed. And it poked, but this poking was worse. And it still poked when I laid back down. This time, I pushed the button and woke up Mark at the same time. My doctor hurried over. She lives close to the hospital. They brought in extra light, and super-sterile equipment. They checked me again. "That's never happened before," Dr. K said as she pulled the broken cerclage out. They wheeled me across the hall for a better ultrasound to get an idea of his size. As usual, his heart was strong and he was measuring exactly in line with his due date. They gave me a dose of steroids. If the baby was still inside 24 hours later, I'd get another one. We weren't sure if Isaac was coming that day or that week, and so we waited.

After the cerclage broke, I was 1 maybe 2 centimeters dilated. When the doctor came by later in the afternoon, I was 3. They sent me one floor down for a magnesium sulfate infusion. If you've had high blood pressure late in pregnancy, you'll know the feeling. Hot flashes and cotton mouth without ever being able to get the room cold enough. But at the same time, the room is so cold, when they need to do a blood draw it takes a few tries before they get a good stick. Oh, and no food or water, constant fetal monitoring too. My blood pressure was fine, but the magnesium gives the baby neural protection in the event of prematurity. A full infusion lasts 12 hours. I had a full one when I was 23 weeks pregnant. This didn't end up being a full one.

The monitor started to show some contractions, even though I couldn't feel them. Dr. K checked again, and I was 5 centimeters, with an amniotic sac that was bulging, and baby feet that were kicking really far down. Dr. K sat down and we had one of those frank doctor discussions. I had dilated far enough that real labor was starting to kick in. Isaac was breech and needed a c-section. We could do one now, when all the medical teams could have everything they needed for him and me in place, or we could wait, maybe a few hours, maybe almost a day, until my water broke, and we'd be in more of a dire emergency, emergency situation. Either way, Isaac wasn't going to get much more of the time in utero that he so desperately needed. We opted for the c-section now.

All along, we had been hoping for a December birthday for Isaac. His due date was January 11, but various and sundry medical conditions made it highly likely that I'd need to be induced by about 38 weeks, which would have been December 28. December 12 seemed like a good day to me. Feast of Our Lady of Guadalupe, patroness of the unborn--it doesn't get any more fitting than that. The Sunday in question was October 13, and as my mom reminded me (and my doctor's mom had reminded her, (and we reminded each other in turn)) it was the Feast of Our Lady of Fatima. Swapping one apparition for another felt like Mary's way of telling me, "Hey, I've still got this."

As we waited and waited for them to finish the prep for surgery, the neonatologist on call came by for a final consult before delivery. This consult went so much better than the 22 week consult we had after first being admitted. That one had so many tears and so much despair. This one still had tears, but there was also so much hope. The neonatologist on call that night was actually a family friend. Mark went to school with one of his sons, which was an easy thing to do at Houston's Jesuit high school in the 90's. The man has 10 sons. He also wrote the book on prematurity, literally.  In fact, his was the book we had put away in a drawer not too long ago. Seeing a familiar face in all the scariness was another little nod that all would be well.

Surgery was prepped, NICU teams were at the ready, gurneys were wheeled. I had my first spinal, which wasn't bad at all and a nurse anesthetist who made it her personal mission for me to stay warm and cozy through it all. She also did a good job of explaining what kind of tug I would feel when Isaac was almost born, and of telling us when they'd be carrying him by to take him to the waiting NICU team, so we could be sure to catch a glimpse.

In all my reading and scary googling the one fact that broke my heart the most was that typically, babies born before 29 weeks are too under developed to cry. A baby too weak to cry, just the thought always made me cry. But after I felt the tug I was warned about, and before he was carried by, I heard a cry. His cry. It wasn't loud, but it was there. And it was beautiful. Then I really let myself believe that this might all turn out ok. My baby was strong enough to cry. I didn't get to meet him until more than 12 hours later, but he was strong enough to cry.

And that was how Isaac was born. Shortly after, Mark left my side to go and be with Isaac, and to baptize him. His baptism made quite an impression on the medical staff that was there. More than one of them has stopped by Isaac's bed in the NICU to tell me how much he's grown since that night and how they were so honored to be at his baptism. I'm sure he cried all through that too. 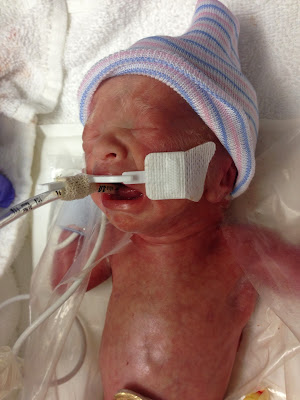