1. This little update is brought to you by the Medela Symphony. These days, it feels like my life has become a Medela commercial. Since being discharged from the hospital, most of my time not spent in the NICU has been used to fiendishly acquire more Medela gear. Tonight, I am looking forward to not washing or sterilizing any parts of the pump in the middle of the night since we now have enough extra. Hooray!

2. Something you don't ever really want to hear your doctor say: "Well, that's never happened before," uttered upon discovering the cerclage had gone kaput.

3. Something it is nice to hear from a nurse: "Dr. K always has the best incisions, small and smooth," said about my doctor, while checking my own c-section incision

4. A saying in the NICU: "Closer to the door, closer to home" In this particular NICU, the babies are grouped in pods. Isaac is in the center pod for now, which is home to the most fragile babies. When he gets stronger, he'll be moved to one of the pods closer to the doors. Even though the day he gets to come home is very far off, we're looking forward to when we walk into the NICU and don't find him in the central pod. 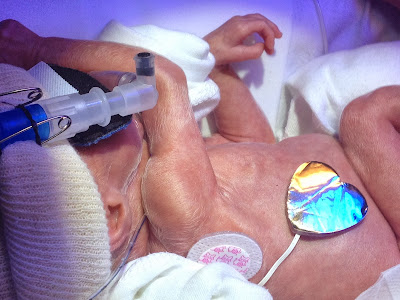 5. I sent this pic of him to my sister Jessica the other day. When I was born, I had quite the head of hair and a lot of fuzz too. The first time she saw me, Jessica announced that I was just like a little wooly mammoth. Being so little, Isaac has more of an excuse for all his fuzz, but we sure do love our own little wooly mammoth.

6. The nurses have been letting us help a it more in caring for Isaac. Mark and I got to change his diapers by ourselves for the first time today. Mark let me do the honors this morning, and being altruistic, I let him have a turn tonight. What was meant as a purely noble gesture took on a new meaning when Mark's first diaper change involved quite a bit of meconium. (Geez, she's had a baby for 5 days and has already managed to talk about his poop on the internet!)

7.  A quick Isaac update:
~Our little guy was born Sunday night at 27 weeks and weighed 2 lbs 5oz.
~After spending half a day on the ventilator, his doctors decided he was breathing well enough to switch to a CPAP (something his grandfather and uncle both use for sleep apnea). While he is getting a little help keeping his airway open, he's doing most of the work on his own.
~His bilirubin levels were elevated earlier in the week but have returned to normal. So today, he was released from his tanning bed, which also means that we could touch him again. While he was under the lights, if we were touching him it meant that we were covering his skin and defeating the purpose of said lights.
~He's been getting breast milk since day one, first a donor's and then mine and today they were able to increase the amounts he gets each time, which the nurses tell me means that he should start putting weight back on soon.
~Still haven't been able to hold him yet, but they tell me soon.
I hope talking about how well he's doing isn't going to jinx it, but really he is doing remarkably considering how small and young he is. The first night, his nurse described him as feisty and it looks like that character trait continues to serve him well.

Thank you for all the prayers and well wishes. All your prayers and Isaac's feistiness make quite the team! Go see Jen for more takes.
Posted by Anne B. at 11:14 PM