Welcome back for another round of MIM. After miserably failing, read: not even attempting Jessica's last challenge, I figured I had better bring it this time.

Mark and I sometimes go to this french bistro that takes being french very seriously. So seriously, I'm sometimes afraid to say my order out loud for fear of mispronouncing it. They have a wonderful brunch menu on the weekends, with the usual omelettes, crêpes, french toast (made with brioche of course), and sweet waffles or as they say, gaufres sucrées. But the life-changing section of the menu is the gaufres salées, "salted waffles." These waffles are crispy on the outside, buttery, and not at all sweet. And the toppings, sigh...the best way to describe my favorite gaufre salée is that it's like eggs benedict, except instead of an english muffin, they use a savory waffle. And instead of canadian bacon, they use smoked salmon, and they put some asparagus in there for good measure. And when I made it, I added dijon mustard to the hollandaise sauce, which Wikipedia tells me makes this modified sauce something called sauce gironde. So like Eggs Benedict, but not, since the only thing that remains from the original is the poached egg.

If what I made for dinner were on the menu at that bistro, I think it would be called Gaufre Salée avec Saumon Fumé et Sauce Gironde or Salted Waffle with Smoked Salmon and Sauce Gironde. Their way just sounds better doesn't it? Even if you don't quite know how to say it right...which I don't. 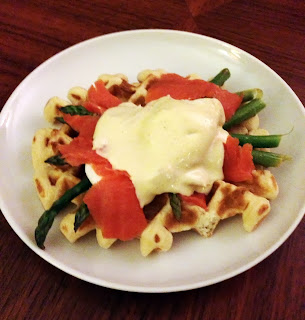 This made a lot of dishes, and used a lot of eggs, but goodness, was it delicious! I used this recipe for the waffle base, but left out the scallions and pancetta. It's not as good as at the bistro, but with some tweaking, maybe less yeast, more butter and salt, it could be.

For the Hollandaise sauce, I used the blender method in Mastering the Art of French Cooking. Julia Child, ever the culinary instructor, urges you to try the on-the-stove method first, and I've made it that way before. But really this way is fool-proof, and uses half the butter. Julia assured me that if I wanted to, I could whisk in another stick of melted butter after blending if I felt it was necessary. I didn't.

Now, to make that into a sauce gironde, add a spoonful of dijon mustard and stir it in. Since we were having this for dinner, not for breakfast, the mustard was a nice addition. The tanginess of the mustard cut through the richness of the sauce nicely. Not quite up to french bistro standards, but maybe someday.

Full disclosure, Mark did the dishes. He said tonight's dinner was delicious (he went with scrambled eggs instead of poached, and bacon instead of salmon). After cleaning the kitchen however, his take away was "Next time mustard is the mystery ingredient, let's make bratwurst with mustard and call it good." For my part, I'd be happy for an excuse to eat this again.


And so ends another round of Mystery Ingredient Monday. For more inspired recipes, go visit Tasha and Jessica to see how they featured the mystery ingredient. Jessica's hosting the link-up and Tasha's picking next week's ingredient, so be sure to check it out.

If you want to play along but don't have a blog, instagram or tweet it #mysteryingredient, or tag us in a facebook post about your dish so we can marvel your creativity. See you next week!