1.) My favorite Christmas carol isn't all that well known, at least you won't hear it blaring while Christmas shopping, or on the average top 40's radio station that always seem to play the same 12 Christmas songs over and over. In German, it's called Maria Wiegenlied; in English, it's known as The Virgin's Slumber Song. I love it because of its lullaby tempo and melody. I first learned it while taking voice lessons in high school. Here's a high brow duet of the song. The woman in green is Federica Von Stade, who I only know of because my teacher told me I have the same quality mezzo-soprano voice she does. I should probably say had since I haven't done any serious singing since 2009. Anyone know of a good polyphony choir in Houston?

2.) And now, here's the English translation:

Amid the roses Mary sits and rocks her Jesus-Child
While amid the treetops sighs the breeze so warm and mild
And soft and sweetly sings a bird upon the bough
Ah, Baby, dear one
Slumber now

Happy is Thy laughter; holy is Thy silent rest
Lay Thy head in slumber fondly on Thy mother's breast
Ah, Baby, dear one
Slumber now.

So simple and so beautiful. I especially like the beginning of the second verse.

3.) 2008/2009 was the last trip I took with my choir, Collegium Cantorum which is sadly no longer a part of the University of Dallas. We traveled to Italy-Assisi, Florence, Palestrina and Rome after Christmas and through New Year's. It was a great trip. Here's a video of us singing Sicut Cervus in Palestrina, Italy. I'm singing the alto line, and if you look for the blonde in the lower right, that's me.

4.) Have I bored you with sacred music yet? One more story about that trip. Due to a snow storm in the Midwest and a baggage workers' strike in Rome, I was without my luggage for 9 of the 10 days of our trip. And even then, I'm certain the only reason it was ever recovered was because our Italian guide knew somebody who worked at the Roman airport and had him on the lookout for it. Let's just say, if you're going to lose you luggage, it helps if you're on a trip with about 20 other close girl friends willing to share clothes and cosmetics. Pro tip: wear your coat on the plane...don't pack it. You'll be glad you did.
It also helps when you are traveling with an excellent photographer.

4 1/2) Ok, maybe I lied, last one, I promise. This trip was also shortly after Mark and I met and started seeing each other. I still remember waking up early-early-early on New Year's Day so I could snag the only phone that made international calls in time to wish him a "Happy New Year!" at midnight in Texas. It must have been pretty obvious how smitten I was, because my friends dubbed me "Fidenzata" for the rest of the trip, which means "betrothed" or "affianced" in Italian. They were onto us, because 4 short months later, we were!

5.) I'll stop reliving the glory days now, promise. But speaking of Europe and Christmas, Have you ever read  Maria Von Trapp's The Story of the Trapp Family Singers? It's such a good read. I especially love the parts where she describes their family Advent and Christmas traditions. In Germany and Austria, children write letters to baby Jesus, not Santa Claus, place them on their windowsills and an angel is supposed to deliver them to Heaven. Today, the Catholic World Report, published a letter to Jesus written by 7 year old Joseph Ratzinger. You can read the full story here. But here is the text of the letter:

"Dear Baby Jesus, quickly come down to earth. You will bring joy to children. Also bring me joy. I would like a Volks-Schott, green clothing for Mass and a heart of Jesus. I will always be good. Greetings from Joseph Ratzinger "

The article says that "The Pope was very glad to find the letter and its contents made him smile."

6.) Christmas can be a challenging time for those of us who would dearly love children of our own. The effect it has on one's prayer life is written about much more eloquently in this article, which I keep pinned in my bookmarks bar so I can go back and re-read it. But this Advent season, I've also been greatly helped by this homily by a former UD chaplain. If I were writing a letter to Jesus, I'd ask him to help me hope the right way. Not the fingers-crossed hope of "maybe this month, we'll have some exciting news", but the wiser, less impulsive hope that trusts that while God's ways are not our ways, he has given us all we need to live with great joy. I am so far from learning this lesson, which I need to learn in so many areas beyond the scope of infertility, which is why I share this homily with you. I want to be like Mary, not like Zechariah.

7. And now, for something completely mundane, if you're looking for the perfect neutral lipstick that won't make you look like a dead body, look no further than Laura Mercier's lip color in Pink Label which I got at Nordstrom, but which I can't find for sale anywhere online, at least not in that shade. It's so close to my natural lip color that they should have named it Anne. I've been trying to take my mother's advice, that if you don't wear eye-liner, you'll look tired (she's right btw), and in doing so, I've wanted a lip color that doesn't feel the need to make so much of a statement. It's more neutral than it looks, I promise! 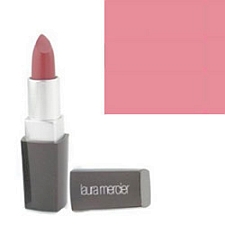 Now go see Jen! And be impressed by the fact that I'm actually posting this on Friday!