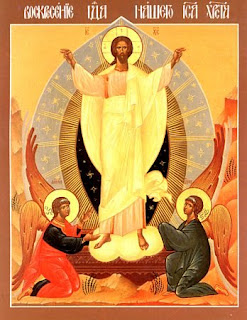 The gospel is filled with so many contradictions. "My yoke is easy and my burden is light," but "Whoever wishes to follow me must deny himself, take up his cross, and follow me" The prophecies foretelling Christ speak of a great king who rules with a mighty hand, and yet they also speak of the suffering servant. What's a girl to think?

Of course the apostles were bewildered when Jesus was put to death. Most of what he had said hadn't quite made sense to them in the first place, and so it follows naturally that they should scatter when their shepherd was taken from them. What little faith they had would have had been shaken to its core.  I would have fled too.  I would have despaired and doubted that things could ever have ended well given what just happened.  To put it coloquially, I would have wondered, "How's he gonna get himself out this one?"

Luckily for me and my little doubting heart, God's ways are not our ways and the wisdom of God is the foolishness of men. Against all odds, Christ's victory over death was complete and undisputed, the final round, the last word. Salvation was complete. Man's debt to God had been repaid in full.  The good guys won.

So often, I am quick to say that a problem is unsolvable, no good can come out of this and so forth, I would do well to remember that the good guys won. When God is involved, they always do.
Posted by Anne B. at 10:45 PM